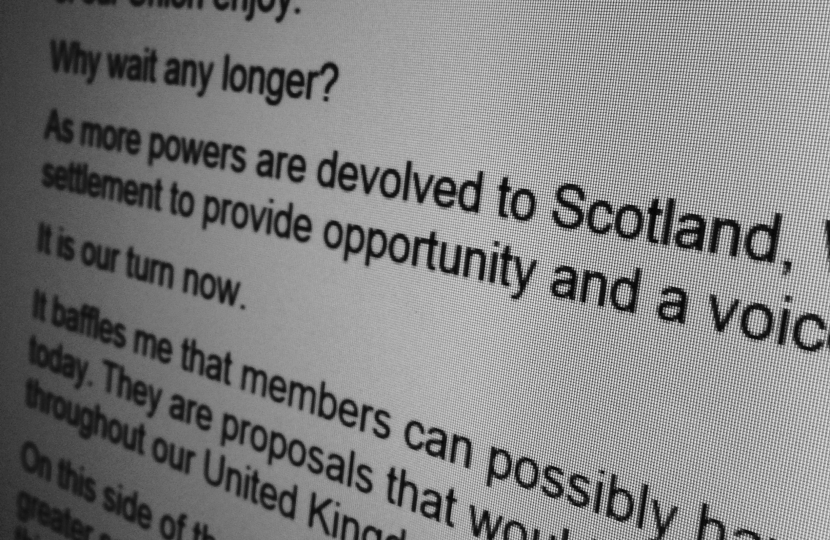 I was hoping to speak in the debate on English Votes for English Laws today. I'm so glad that the motion has been passed, and here's what I would have said!

I think the time is right for this question of English Votes for English Laws to be addressed and resolved.

For me, this debate is a straightforward one. It is a simple matter of fairness and equality, values which Parties on all sides of this House believe in and promote.

As promised, the Government has continued to provide the other nations in our Union with further devolution, so they can settle matters specific to their own nations without our involvement.

As more powers are devolved, England surely deserves its own form of devolution. The proposals before us today contain a simple process whereby English MPs are asked to explicitly consent to measures affecting England, the same precedent that any other nations of our Union enjoy.

Why wait any longer?

As more powers are devolved to Scotland, Wales, and Northern Ireland, a constitutional settlement to provide opportunity and a voice for all is surely the next logical step.

It is our turn now.

It baffles me that members can possibly have any objections to the Government’s proposals today. They are proposals that would bring about more fairness and greater equality throughout our United Kingdom.

On this side of the House, we believe strongly in the idea of localism. Giving local people a greater say on the issues that matter to them can only be a good thing, and this belief is one thing that I am happy to have in common with members opposite.

Too often, I hear anger and disappointment from my constituents in Derby North who can see a situation where Scottish MPs would legislate on matters in the UK Parliament, and then vote another way in the Scottish Parliament, leaving England to bear the brunt of any changes.

Nobody is arguing against further devolution for Scotland, and SNP members should be proud of the way that they have forced Scottish issues to the top of our agenda, but the time is surely right to address the question in England, too.

I hear members opposite talk about the dangers of creating “two tiers of MPs”, but would they not agree that, practically, there are already two anyway?

MPs in Scotland, Wales, and Northern Ireland can talk about devolved matters such as the NHS on behalf of their constituents, but they can’t then legislate on them. However they could then have a decisive vote on matters only affecting English constituents.

We must emphasise that every MP from every part of the Union will still be able to debate and vote on every piece of legislation that comes before this House.

To my mind, there is simply no reason to wait any longer to deliver this fairness. The Government has kept its vow on devolution to the nations, and it should keep its vow on English Votes too.